Last week was crazy in the household. It was Yui’s exam week and we’ve got tons of cupcake orders. That’s why we didn’t get a chance to have some Kiddie Kist time. Since it’s already school vacation this week, we finally get to have some time for arts and crafts. The second activity in the December Kiddie Kist box is the Potpourri Christmas Card, which was really nostalgic for me. I remember during my younger years before Photobooths became hip and popular, giveaways on birthday parties and weddings are potpourri bottles. I don’t know how they were so popular back then but I remember having a huge collection in my boarding house. So it was cool for Kiddie Kist to introduce potpourri to the younger generation. 🙂 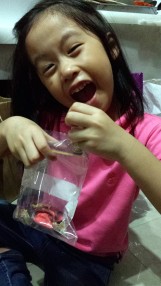 Step 2: Pour the oil into the potpourri bag

Step 4: Put some glue into the petals 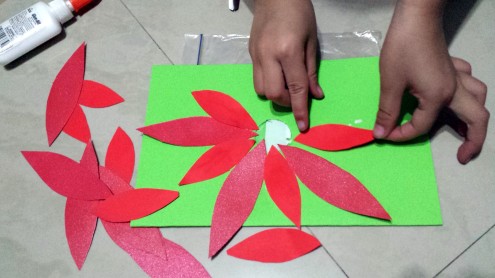 Step 5: Cut a hole in the middle of the front side of the card and then glue the petals around the hole 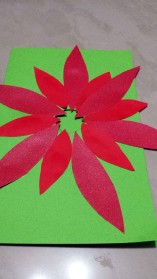 Step 6: Put scented dried flowers in the middle of the tulle

Step 7: Secure the bundle with the string that came with the oil bottle

Step 8: Pull through the potpourri bundle into the hole

Step 10: Write a Christmas message inside the card. Yui wrote hers for her grandma

Thankful for supportive women in the workplace for pushing us to be, to feel and look our best. By applying the "leadership from your laptop" tips, I can go from #wokeuplikethis momma to #readytotakeovertheworld lead easily 💞💖👄 . . . #AoTWLive #LeadershipFromYourLaptop #MoreTogetherNowPH
2 peas in a pot? 😅 Edit by ate @cuteness_yui #yuiartwork
So proud of ate Yui's creativity 🥰
It's been a Korean week at home, every other day ata kami ganto para hindi masayang mga banchan. Mahirap magprepare ghorl, so kelangan sulitin 😅 Another excuse lang din coz miss na mag-samgyup 😋🇰🇷🥰 #quarantinefoods #kusinaniena
Andale! Andale! Viva los Taco Tuesday! 🌮🌮🌮 #quarantinefoods #kusinaniena
Baked mac #quarantinefoods #kusinaniena
Buh bye summer 2020 that never was 😅 #missingthebeach 🏝
Here's a tribute to 'em shoes who think that I died 😅
Dreaming of the sun, sea and sky 🌞 Summer part 2 tayo soon! Kapit lang 😁🙏