Yui used to be too camera-shy that you just had to get A LOT of shots to have one decent photo. It was only after several blurry shots that we get one worthy to upload. But that isn’t the case anymore. After turning 3 this year, the little one became chummy with the camera. I think knowing how to work the camera also helped their “relationship”. With this new development though, our phones and digital cameras are now full of floor, walls, TV and close-up face shots. Some of her shots are artsy too 🙂 But most of all, we now have lots and lots of Yui pictures in different poses.

With 10 days to go before daddy comes home, here’s Yui in 10 different faces all taken since daddy left for the US.

The Different Faces of Yui

Clockwise from top right: With Minnie at the Pedia-Ophthalmologist check-up; Stickers everywhere, including her face; Posing with her Alphabet poster; Singing a lullaby to put Woody to sleep; “Skyping” with Daddy; Carefree little girl at Jollibee.

Clockwise from top right: “Pouty”; A messy ice cream face; Yummy pancakes at Banapple; In the car on the way to Las Piñas — bored since traffic was insane!

In other news, Steve Nash is going to be a Laker. And he’s going to wear jersey #10. Luckily, I have the best husband in the world! Daddy Bunny got me a Nash shirt when he went to L.A. a few weeks back. I’m still undecided if I’m going to start cheering for the Lakers but I’m still a Nash fan. 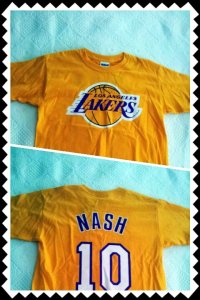